I had trained before as teenager, getting an introduction to martial arts that was appropriate for an adolescent, but in retrospect lacked a connection to tradition and real functionality. Sidelined by an injury, I gave up on training and spent ten years running, swimming, mountain biking, weightlifting, playing basketball, and doing yoga. As fun as the variety was, I instinctively hungered for a focus, a specific discipline and practice for my efforts.

Nearly a decade later at the age of 27, I decided it was time to seek a return to martial discipline. I googled “San Francisco Shotokan” and found that a non-profit called Shotokan Karate of America was practicing only 6 blocks from my apartment on Tuesday and Thursday nights. There was no excuse not to try it out.

My first practice was on a Tuesday night in April of 2016. I had exchanged emails with Mike, the dojo manager, who was welcoming and encouraged me to drop by and participate in a class. As I walked down the wooden ramp into the door of the church, I noticed myself grinning widely. There was an ethereal and highly positive energy coming from the cracked doorway…something in my gut told me that this was a special place. My first practice was a whirlwind: kihon, kata, kumite and a lot of sweat. I found out that I had no idea how to punch, and Tim Makuta showed me the difference between striking with only the arm and using the whole body through the hips. I was hooked. This was for real. 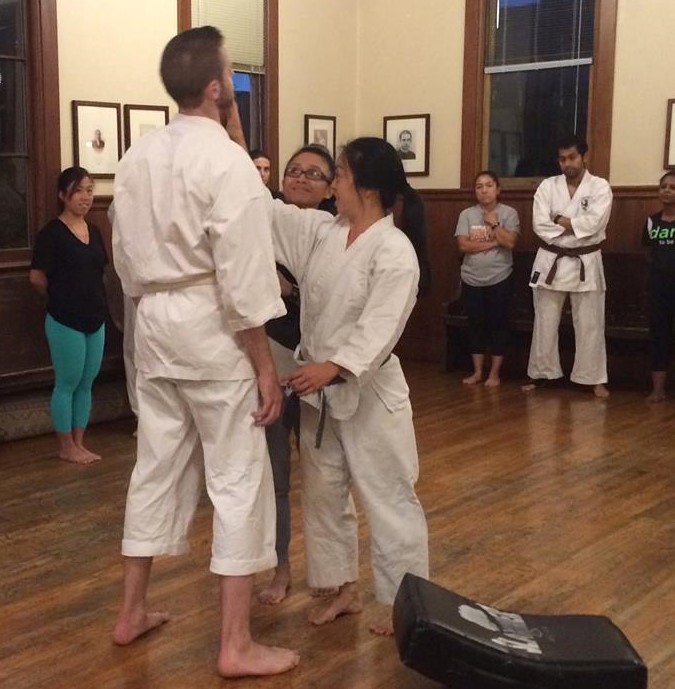 Looking back on 14 months of practice, three Special Trainings, one women’s self-defense seminar, two kyu tests, one 60th anniversary celebration, a visit to the South LA dojo, two trips across the golden gate bridge with oizuki, and countless friendships and lessons learned, it is very hard to believe that it’s only been a little over a year. The number of experiences, teaching moments and encounters with incredible people now seems too vast for such a short time that went by so fast. How beautiful to know that this could continue for a lifetime.

I would like to briefly summarize what I feel are the most potent and valuable aspects of karate practice with this organization:

I came to SKA already very engaged in my own physical fitness. But karate introduced a new dimension of kinetics, balance and coordination to my adult sense of ‘body’ and self. While yoga poses held for a long time can be very taxing on the muscles, karate demands low stances held indefinitely alternating with swift and powerful blocks, kicks and punches. Additionally, it has taught me so much about the power of our breathing to make us move with one feeling: timing our blocks and strikes with our breath to maximize kime, the mental “blink” that occurs between an exhalation and inhalation, and the significance of our kiai. Often, by loosening our bodies and avoiding excess tension, we are able to more effectively transfer our energy into our movements and our opponents with our strikes and blocks (not “driving with the e-brake on”). My strength training and conditioning is still important, but my understanding of how to perform these has been refined and informed by my practice, as well as improved my flexibility significantly. If I were to only have time for a single physical activity, I would certainly choose karate. Its benefits extend far beyond fitness and strength.

I have run races, mile time trials, half-marathons, and completed other intense physical trials that have brought me close to what I believed were my limits, but for me nothing can compare to the mental and physical challenge of Special Training. With the encouragement and example of strong seniors, I broke through new barriers of fear and uncertainty. Sleep deprivation and muscle fatigue accumulating, I was forced to rely on the strength of my mind to endure through the 4-day practice. This was the most valuable lesson…to get a glimpse of what human beings are really capable of, what human strength and spirit really is. Most exciting of all is to feel that I have only scratched the surface of my potential, that each time I can go back and find something new. I now feel like I have seen behind the curtain, as though I know something that very few people do. I am also overcome with the desire to share this experience with others who might benefit. I believe now that real power is not found in big muscles or the domination of others, but rather in the ability to master one’s own emotions, body, and energy. The ability to totally destroy a dangerous opponent with a single blow is merely incidental to our mastery of self.

What is special about SKA?

SKA is a non-profit, the oldest traditional karate organization in the United States, now with branches all over the world dedicated to practicing the same art. It is a big family, one where you are united with others of all ethnicities and walks of life by this discipline. The seniors give of their time freely, with no expectation of reward other than the success and improvement of their juniors. Mr. Ohshima is healthy and still teaching, and many of his oldest students are in their 50s and 60s and still dedicated to their practice and their role as leaders. To my knowledge, no other martial arts organization engenders this kind of cohesive devotion, and no other organization maintains the Special Training tradition, which is said to be the essence of traditional marital arts.

Will I continue to practice?

As long as I am physically and mentally able, I will practice. In fourteen months, my mental and physical condition and capacity have improved so much (along with my life circumstances) that I cannot in good conscience stop practicing. Life is sure to ebb and flow in difficulty and abundance of free time, but I will continue to seek the dojo when I am able. I remember saying to another member just before my second Special Training, “I’m scared of what will happen if I go back, but I am far more scared of what will happen if I DON’T go back”. The benefits of our practice are immeasurable and boundless, that much is clear to me. I can only hope that I am fortunate enough to continue on this path, and perhaps one day have juniors of my own with whom I can share in the value of this art.